If you ever plan to motor west,
Travel my way, take the highway that is best.
Get your kicks on Route sixty-six.

It winds from Chicago to LA,
More than two thousand miles all the way.
Get your kicks on Route sixty-six.

Won’t you get hip to this timely tip:
When you make that California trip
Get your kicks on Route sixty-six.
-Nat King Cole 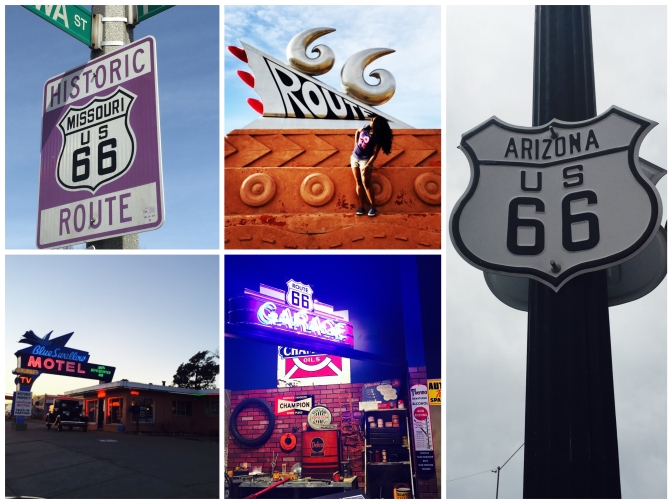 In the 60’s, Route 66 had gained so much popularity, there were TV shows and movies made, songs sung and books written about it. This Blues classic makes me nostalgic every time I listen to it. It’s essence is of a free spirit explorer on an expedition to the wild wild west.

I was in college when I first read ‘The grapes of wrath’, the book that brought home the Nobel prize in Literature for John Steinbeck, a Californian. He very vividly depicted the journey of the migrants during the Dust Bowl, from the midwest [Oklahoma and the plains] to the rich farmland that California was back then. Around this time the Route 66 was built and it flourished for a long time. It was called the Mother Road and also the Main street of America. This route almost became a cultural heritage for the mid-westerners, as they traveled 2000 miles to get a place where they could grow a crop again.

When the Interstate highway system made its way, the route 66 was officially decommissioned with I-40 running all the way from Chicago through LA in parallel to Route 66. Although, the main street of America was then named the Historic Route 66, parts of it was conserved for its heritage.

On March the 21st of 2015, a year had passed since we tied the knot, the husband and I set out on our first cross-country road trip. Our journey on the Mother Road, felt a lot like a movie from the 1960s. The teepees, the motels with bright neon signs, the Indian antique stores and the Historic Route 66 byways were all, our next ten days were about. We had entire trip planned to the hour. When I say we, I mean me, the OCD me. I had the itinerary laid out for the entire trip including departure time for everyday, activities, pit stops and lodging. I had an excel spreadsheet created to track my plan with all the hotel bookings, check in and check out times and even the departure times for each day!

We stayed at a different city along the route every night. We checked in at the hotels about 9 PM every night, made sure we got a good 8 hours sleep before heading out early in the morning. We planned to not spend more than 7 hours driving, any given day during the trip. But I think even that was a stretch, if you ever do a cross-country road trip, DO NOT plan to drive more than 5-6 hours a day. You will want to stop along the way for food, gas or just a scenic attraction. It kills time! More so, you want to be able to enjoy your drive and not kill yourself.

You could do the spontaneous, on-the-go trip without having to do any planning. That would just be a buzz kill for someone like me who enjoys the process of researching and planning just as much as the trip itself. I should warn you though, a lot of things can go wrong if you are going to make this trip an unplanned one. Some parts of this route stretch so far into the deserts and the plains that you might not find a city to spend the night at sundown or not be able to find gas stations for miles together.

Every stop and the entire road trip was an amazing one, but I do have my favorites; the city atop a sandstone mesa, a small little indian town called Tucumcari and the Blue Hole in New Mexico, the deserts of Texas and Arizona, the mountains and the Hoover Dam in Nevada, the drive by the ocean on Highway One in California and last but not the least, the magnificent Grand Canyon.

It’s all about the journey not the destination, when you are on Route Sixty-Six!